Eswatini’s entertainment scene isn’t what it was a decade ago. It is evolving as local promoters painstakingly work hard to satisfy the insatiable needs of a fun-loving population.

Joining this growing number of promoters is the Ambient Amplified, an underground movement under Ol'Tymers Session co-founded by Siphelele Jazzinsoul in 2012.

These sessions have come a mighty long way. He recalls that it was in 2016 that Ol’Tymers Session introduced its own brand called Ambient Amplified initially created to unite underground music lovers across the kingdom of Eswatini. “Our first sessions of Ambient Amplified were hosted in Solanis Shisanyama back in 2016. With time, the sessions were hosted at Ron-Deh-Voo in Mbabane. From Ron-Deh-Voo they started growing, a lot of people starting following this movement, so in 2019 Ol'Tymers Session decided to do a show called The "Ambient Amplified Gathering” which attracted a lot of underground people from all over the country,” he explained.

Due to popular demand, the second edition of the Ambient Amplified Gathering will be held at Nkam Park in Sphofaneni on March 28.

This year’s edition features acts from Lesotho & South Africa plus the best of local spinners. It is set to start at 12pm till morning, this gathering is also an Amarula Edition. People will be allowed to bring in their Amarula drinks and cooler Boxes, plus camp chairs because it’s an outdoor event.

JazzinSoul further stated that the movement focuses on creative events and also a music podcast.

Through the podcast, Ol'Tymers Session has also featured quite a lot of artist around the globe such as Davis Oniani [Russia], Michael Bishop [Australia], Lorenzo Calvio [Italy], Jazzman [Germany] & more. 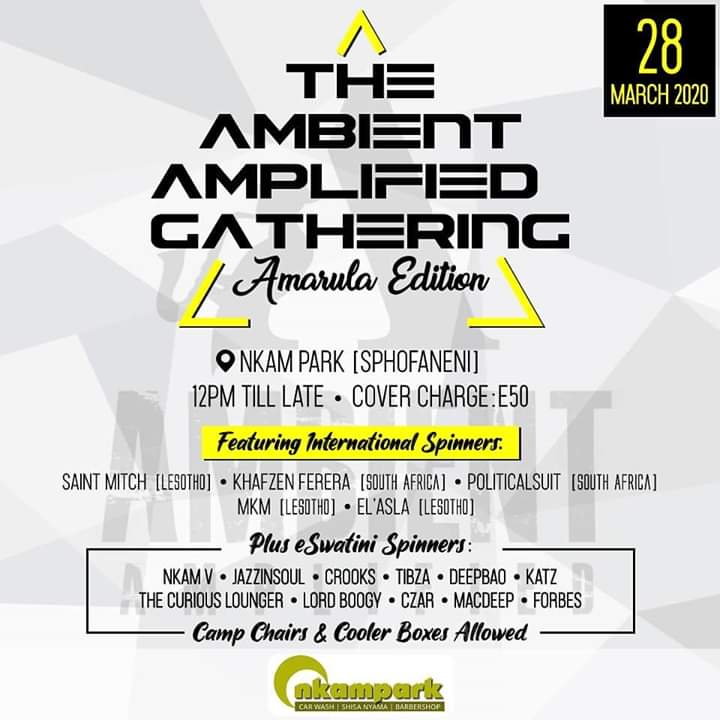