EXPOSED: Montigny COVID-19 employee’s death and how the Nation remain in danger

MBABANE:Masitsela Dlamini, an engineer at Bhunya Montigny Investments allegedly died after testing positive to COVID-19, he was admitted at Lubombo Referral Hospital.

Dlamini’s death was confirmed to this Swaziland News by his wife Namile Mavimbela-Dlamini, a nurse at the Raleigh Fitkin Memorial (RFM) hospital in Manzini who declined to entertain further questions saying the family was yet to meet over this matter.

“Yes, it’s true but I cannot give further details as we are yet to meet as a family over the matter” she said.

An independent investigation by this publication uncovered that the wife to the deceased is currently under isolation and waiting for her results at the Bethel Court, Ezulwini, a hotel owned by Senate President Lindiwe Dlamini.

Bongile Mbingo, the Ezulwini Mayor with strong links to the ‘ruling’ Jesus Calls Worship Centre (JCWC) who doubles as the Bethel Court General Manager did not respond to our questions when asked to clarify whether the isolation costs of the COVID-19 suspected case  would be funded privately or by government.

But in the midst of this investigation, Health Minister Lizzie Nkosi subsequently addressed a press conference where she confirmed what government described as the first death of COVID-19, this happened about 24 hours after Cabinet relaxed the lockdown by allowing companies to resume business.

“He was admitted with a moderate to severe iliness having been diagnosed with pneumonia and diabetes mellitus on admission. His condition was stable since admission, however he suddenly deteriorated, was resuscitated but unfortunately died on 15 April 2020” said the Health Minister.

It has been disclosed that on the 15 April 2020, Thembi Maphanga, the Montingy Group Human Resources Manager wrote a memo notifying employees that one of their own had tested positive to COVID-19, however, operations were never suspended but instead workers were advised to adopt safety measures while executing their duties.

“We wish to also announce that one of our employees has tested positive for Covid-19 virus and presently undergoing treatment.We wish to assure all employees that in collaboration with the Ministry of Health, all the necessary precautions have been taken to isolate those that were in contact with the employee. We request all employees to keep all safety measures in place to a high standard at the work place and at home, and those basic measures of washing of hands,sanitizing, wearing of face masks, and temperature checks be conducted continuously” said the Montigny Group Human Resources Manager.

Andrew LeRoux, the Executive Director at Montigny Investments confirmed to this Swaziland News that one of their employees has passed on after he was hospitalized for pneumonia and diabetes.

“I can confirm that one of our employees, who was hospitalized on 6 April for pneumonia and diabetes, has passed away. The cause of death has not been confirmed. We are working closely with the Ministry of Health. Our thoughts and prayers are with his family” said the Montigny Director.

But Warnder Mkhonza, the Secretary General of the Amalgamated Trade Union of Swaziland (ATUSWA)wondered why Montingy Investments was allowed to operate in the midst of the lockdown saying the company was not providing an essential service.

“Why was Montigny allowed to operate anyway during the lockdown because sawmills are and shall never be an essential service. Who would have died has Montigny stopped operations like the other businesses. Now, they have killed an innocent person because they wanted to feed their appetite for huge profits. We implore the Minister of Labour and Social Security to stop operations at the company immediately until all precautionary measures have been taken including sanitization of the entire plant” said the ATUSWA Secretary General.

But sources within the RFM Hospital told this Swaziland News that they strongly believe it was their colleague who might have infected her husband unaware because in the absence of adequate Personal Protective Equipment (PPE), health workers remain exposed to coronavirus.

Bheki Mamba, the President of the Swaziland Democratic Nurses Union (SWADNU) confirmed the matter, saying as a union they received information that the nurse who happens to be a wife to the deceased complained about flue some weeks ago and was given two days-off from work.

Speaking to this publication, the SWADNU President said after the two -days off, the nurse came back and interacted with her colleagues in the workplace and days later, her husband was admitted after testing positive to COVID-19.

“But the blood of these innocent citizens is at hands of Cabinet because government seems to be too relaxed on this issue. When we ask for Personal Protective Equipment (PPEs) it’s not like we want to protect ourselves but the whole country including our families. A health worker interacts with many people including patients who might be exposed to the virus and socialize with family members. Now, the lockdown has been relaxed despite that government is aware that as a country we don’t have the capacity to fight the virus except to encourage people to stay at home. As the situation stands, people are now re-infecting one another and the situation is yet to become worse” said the SWADNU President. 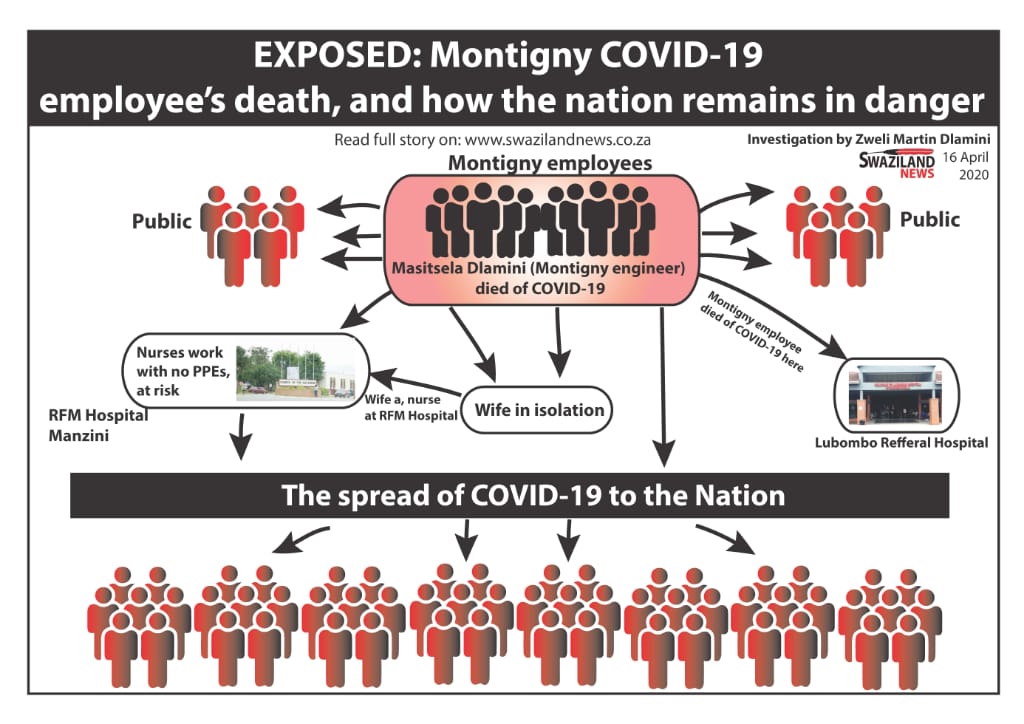 A diagram showing how the virus is likely to spread among the citizens.